And now for something completely different…

A couple of figures from Dungeon Works.  One death knight and 1 lich/skeletal mage.  I found that these figures print bigger than the figures from Fat Dragon.  For 1/72 scale I’ve been scaling down to 75% size for FDG figures.  For DW figures, I found 67% is more appropriate.  I guess FDG is true 28mm while DW is more like 30mm.

Figures were printed on a Creality Ender 3 Pro.

I’ve decided to put some armies together for the French and Indian War and the American War of Independence.  For scenarios I am using the book Seven Steps to Freedom by Charles Wessencraft.  It outlines 7 phases of the American Rebellion starting with it’s roots in the F&IW.  The first scenario is Braddock’s Defeat and the Battle of Turtle Creek/Braddock’s Field or simply Braddock’s expedition.

The rules used in my games will be A Gentleman’s War.  Normally this is a head to head game and the card play really only lends itself to that style of play.  However, if  I get a number of players around the table, I will probably use a card system more similar to The Sword and the Flame.   The Wessencraft book game rules use a low figure count per regiment at around twelve figures per similar the A Gentleman’s War so this has turned out to be an excellent purchase.

Here is a couple of shots of the first few regiments.

Two English regiments. Each has 12 figures. 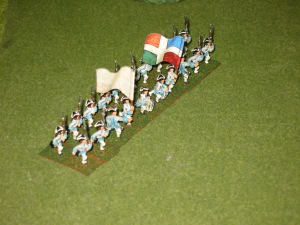 This is how I can normally get a lot of figures painted and on the table.  I plan on painting to the scenario.  So I have 4 Indian Warbands to pain, another 3 English regiments and 3 continental regiments.  I also need one or two light cannon depending on how I decide to crew them.

I’ve been experimenting with some figures created by “Duchmogul” on thingiverse.  The figures are billed as 18mm but after fiddling with scaling, I have found that they match 1/72 scale figures perfectly as is.  There are some older models that he has done that are more in line with 20mm figures but that is neither here nor there.  They all do work without modification to scale.  I’ve printed them perpendicularly with mixed results.  The lines are rather pronounced and as they are fairly detailed, sanding is not really an option.  Painting these figures requires an old school mentality.  Much of the detail has to be painted in by hand not unlike painting in the belts and straps on some of the very old figures out there.  The figure I tested with is called “Hollow Soldier.”  He sort of screams “Barrow Wight” or “Ghost” so some sort of dull gray paint scheme will be in order.  here is the finished rough along side of a Viking Huscarl.  The cloak on the Huscarl shows off the print lines.  At 3 feet away, they are hardly noticeable, especially to the Grognard’s eyes.

Front view with all supports removed.

Rear views. It does look like a fair bit of scraping will be in order.

And there you have it.  It is rainy today so there is no chance this fine fellow will be primed.  I’ll post another WIP pic or two when the time comes.

Here are 2 more armored cars for the 11th Hussars in the Western Desert.  I won’t lie.  Everything about these models is a real pain to build.

About 4 hours of work. Add another hour for the basic turret, not shown.

Here is a better picture of the Marmon-Herrington company.

You can see the waves and lines pretty clearly. In person, with aging eyes, it is not so bad. 😉

When you look at the vehicles up close, with glasses, you can see many of the imperfections that 3D printing does.  However, when they are observed from 3+ feet away, the vehicles do look quite nice.  Now, I just need to figure out the Caunter pattern.

A friend of mine gave the kids and I (OK, my wife too if she is so inclined!) a very generous present this Christmas.  He gave us his old Da Vinci Junior 3D printer.   Now, this is an entry level printer aimed at beginners, which I am!  I’ve been testing it out, trying to see if it is a viable option to print even larger wargaming stuff such as terrain and vehicles.  I decide on a Marmon-Herrington scout car that was used during the early war in the desert in WWII.  I must say, the results are really nice! 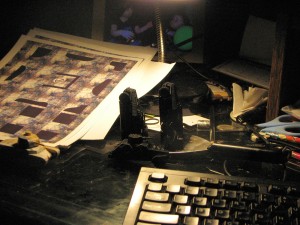 Two scout cars “hot” off the press and another ready to be sanded.

Like most models, these still need plenty of work.  When you print such models, they are often printed stood up like the two in the rear.  Gun barrels especially need this as they will droop if they were printed on their side.  There are also supports that need to be torn off as even printed straight up as they are, plastic will still droop.  It is not a slow process.  One model took about 4.5 hours.  Printing two at a time saved a little bit of time.  When I went to bed, the estimated tome was about 8 hours though as the models narrowed at the top (less surface to print) the  printer probably slightly sped up.

So, this minimalist printer does a good enough job to at least print vehicles.  Whether it can do wargame figures is anyone’s guess.  I have seen the question posed before if 3D printing will change the way we acquire wargame figures and items.  I was once on the fence about this.  I can tell you now, the answer is absolutely YES!

It’s funny how these models sometimes fight you all the way to completion.  This was one of those models.  I built one body only to find out how many mistakes I made and started over.  I must have made 7 turrets before I found a design I was happy with.  The paint is close but not exact.  In real life, this model looks pretty good.  Up close, it looks still a little rough.  I am happy with the $3 investment for as many of these vehicles as I can build.  I will be building two more for the 11th Hussars.  No Caunter scheme.  Just desert yellow. 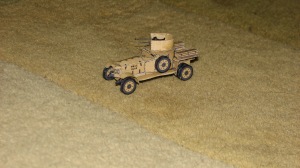 Looking a little rough up close. One thing I will do is line wheels with a dark gray pen from now on.

Looks better from the rear but the black on the wheels really shows, errors and all 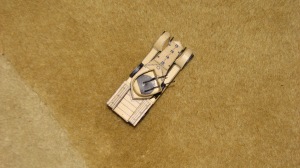 Overhead view showing off the Bren MG and Boys ATR.

Here are a couple of pictures of my first Rolls Royce Armored Car.  the model is by Der Kampfflieger.  The model came with the original turret.  I had to design my own WW2 style turret.  The ATR was scratch built.  I used a Junior General ATR for the receiver and added a round Plastruct rod for the barrel.  I used a thin strip of paper for the muzzle break.  I will do the same for the Bren.  I do have a few bren guns from Raventhorpe but compared to the ATR, the Bren gun barrels look massive. 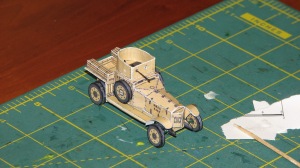 Lots of edging still to be done. Won’t take long though. 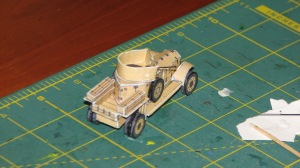 Yep…filling some where the running board meets the fender. Pretty minor though.

I did have a tough time with the fender assembly.  The way I thought they would be, the boards tapered out…which was wrong.  They should be straight.  I ended up cutting my first attempt away and did it again.  The results were much better.

The last couple of days have not been idle.  I painted up a few figures and am currently working on the motorcycles by Zvezda.  Plastic Soldier company has a deal for 11 motorcycles for about $38.  It works out to $3.50 per machine.  Not bad.  They will be filling out the motorcycle units for the DAK forces.  Below are a couple of pics, not only of the first nearly completed cycle but also the detailed version of the sdkfz.10 card model I’ve been working on. 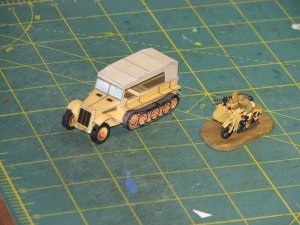 Front view. Both need some paint touch up and perhaps a few more details on the motorcycles.

The rear side view. I think the half track came out pretty darned good!

I am getting ready to design a CMP 15cwt truck.  There was a 1/87 scale version of the truck by Best Paper Models.  Their site was hacked a couple of years ago.  They’ve since entered an agreement with Betexa, another company who sells paper models.  Sadly, only 20 of their models have been uploaded so far and none of them are the CMP.  I’ve been waiting patiently for about 6 months.  The CMP does not look too difficult to design.  So… 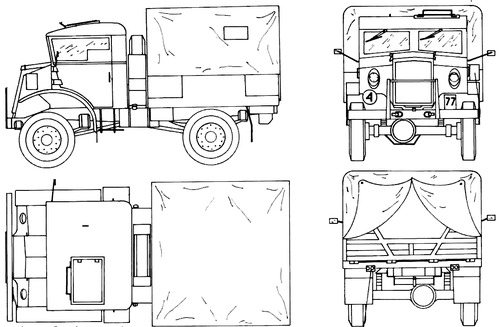 This is about the cleanest blueprint I’ve seen to date.  I’m looking forward to this one.

These have been mostly finished and sitting on my paint table for a few weeks now.  I did not want to bring out the paints until my figures arrived from EWM.  Well, they did arrive yesterday and I spent some of the day today lining and touching up the models.  I think the results look pretty good!  All models by Paper Tiger Armaments.  Note that the sdkfz.222 also comes with a truck.  I have not built it…yet. 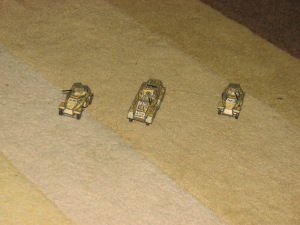 I suppose the extreme weathering with gray underneath is to show that they were hastily painted either before or after arriving in N. Africa.  Maybe they should have primed first?  😉