Dan Mersey has nominated me for a Leibster award.  I think it basically means that he is telling the community that this blog is worth reading.  It is a great way to promote the hobby.  Now I need to return the favor by nominating 5 blogs that I enjoy.  The problem here is that most of the blogs I read are already nominated.  So, I will be breaking the rules and nominating the ones I deem worthy whether they’ve been nominated or not!

First up is Here is no Great Matter.  This blog has a little of everything and a lot of Lost Battles, including some informative replays of the game.

Next we have Dale’s Wooden Warriors.  This was started as another alternative to the Wargaming on a Budget project.  I posted my armies some time ago for a game Matt Kirkhart and I ran at Cold Wars in March 2012.  The figures are extremely nice and very creative.

Up next is Men in Boxes.  Among other gaming aspects, this is a 1/72 scale soldier site.  Some interesting articles here including some warbands for Song of Arthur and Merlin.

I can’t forget Shaun’s Wargaming with Miniatures blog.  This site has many, many reviews using Ancients Wargaming rules set but with a spin.  He wants to game in a 2X2 board and finish the game in about an hour.  Some interesting ideas to “miniaturize” some otherwise hefty rules sets.

Finally, there is The 1/72 Scale Multiverse.  This site has been extremely useful to me on my quest to find 1/72 scale fantasy figures to use in my Lord of the Rings project.

As an honorable mention, check out Dan Mersey’s blog.  Lots of information about books Dan has published including some helpful tips about his excellent game Dux Bellorum.

So, sorry for the retreads but, the blogs I usually read are already nominated.  I guess I have good taste!

The Fellowship of the Ring in 1/72 scale

For those of you who are budget conscious, I will be posting the results of my quest to make Lord of the Rings characters and armies in 1/72 scale.  It has been a challenge so far, but with all of the new figures coming out, including some fine fantasy figures by Caesar Miniatures, the challenge is not impossible.  First up I have for you the Fellowship.

Merry and Sam. Same is painted with similar colors as the Sam in the movie. 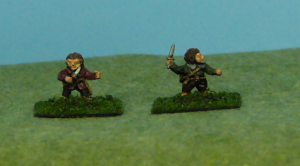 Frodo and Pippin. Frodo wore dark colors in the movie. The only thing missing on this figure is a cloak. Both Merry and Pippin have cloaks. 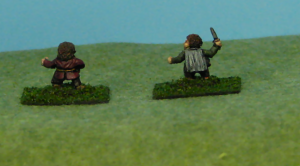 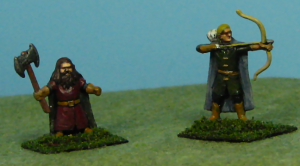 Gimli and Legolas are both painted similar to the movie characters.  I was pondering if the Hobbits were too short or if Gimli is too tall.  I think mostly it’s Gimli.  he should be about 4 1/2 feet tall.  He should also be about a head taller than the Hobbits. He is considerably taller than that.  He looks to be about 5 feet compared to Legolas who should be quite tall as an Elf.  However, the Hobbits are a bit small as well. 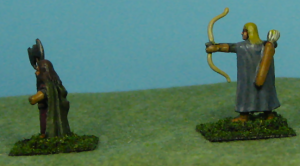 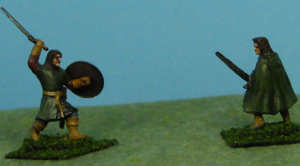 Boromir and Aragorn are also very similar to the movie characters. There was another character with a bow that could have been Aragorn as well. I thought this one was better since he had a two-handed sword.

Boromir and Aragorn (reverse)  Boromir’s shield actually comes from a set by MiniArt,  The Late Roman infantry box.  This set has extra shields both round and oval. 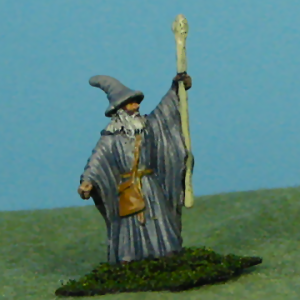 Gandalf the Gray. This is an obvious knock-off of the movie Gandalf…as was the Legolas figure. Not that I am complaining mind you!

Aragorn, Gandalf, Legolas, and Boromir all come from Caesar Miniatures Adventurers set.  Gimli comes from the Dwarves set.  No Dwarves are included with the Adventurers set at all.  The Hobbits are from Chariot Miniatures.  Assorted Hobbits with swords.  the set also comes with 2 Hobbits with shields.  These would work well as Merry and Pippin armed for battle with Rohan or Gondor.  The discription on Magister Militums website says some come with helmets.  Mine did not.  I got 8 figures.  2 of each pose.  I am not sure helmeted hobbits exist.

The cost of any Caesar Miniatures set is about $10.  The bag of metal Hobbits was about $5.  So for $25 I got the entire Fellowship, and enough Dwarves to make an entire Dwarven army.  But more on that later.  Note that the Caesar Adventurers set also comes with about 8 other poses.  Some Barbarians, a few female types, an armored warrior who would make a pretty good Prince Imrahil and the previously mentioned ranger with a bow who I plan to make Faramir.  To put this cost into perspective, you can find a box of metal Fellowship characters for about $22 on Amazon.  You almost certainly can get them on Ebay for a similar price.  However, you will have only 9 figures for your trouble.

Next up, the Orcs…er…Goblins of the Misty Mountains.