It’s a long way to Sardis

While getting ready to play Marathon, I have started to ponder the lack of Persian cavalry.  Herodotus says that the Persians chose Marathon bay as a landing spot because it was ideal for cavalry action.  So, if nothing else,  Datis at least had cavalry in mind when he chose this landing spot.  Looking at the invasion force, the Persian army was limited indeed.  There were 600 Triremes in his invasion force.  At 30 “marines” per ship, it is not likely that this force had more than about 18000 men.  Given that this force also captured and sacked Eretria in the previous year, it is also likely that they did not receive any substantial reinforcements.  The PRESTAGS scenario sets their army strength at about 15,000 men, which is a reasonable number.  Given that Herodotus mentions only 600 triremes, a possibility is that there was no cavalry at all.

Lets assume there is cavalry.  One theory was that it was off foraging when the battle started.  If that is true, then what happened to the cavalry when the Persian army beat a hasty retreat?  They certainly did not get back on the ship.  A second possibility is that they were embarked on the ships before the battle started.  This would be a curious move since the whole of the Athenian army was on the field right there.  My theory is that this was an expedition to get a foothold in Greece.  There was no cavalry.  They would setup a camp and await reinforcements which would almost certainly include cavalry for a major invasion.   It certainly fully fits the narrative that Herodotus gives us.

The Greek army is easy to figure out.  10,000 Athenian hoplites and 1,000 Plataean hoplites.  There seemed to be no light infantry or archers in this group.  Certainly too few to matter if any.

This will be my first big test of PRSTAGS with my custom maps.  I am a bit concerned that the movement rates are a little fast for the slightly smaller battle areas.  I have a few ideas on how to correct that if it turns out to be so.

Finally, I’ve updated the first 4 maps with slightly better graphics.  The rivers are a bit smoother and the hills just look more natural.

As the titles said, I’ve drawn the battlefields for Corinth and Mantinea.  You are probably wondering where the roads are.  Well, battlefield road marches were not really a feature in Ancient warfare up through the Medieval period.   This is because of the lack of formation drill that would allow a large formation of men to go from column to line quickly.  Roads, therefore, would be completely cosmetic.

I’ve added a different style of rivers as displayed the the Corinth map. 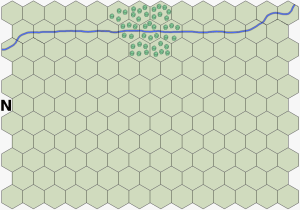 Corinth.  Both armies start within three hexes of their respective baselines. Allies on top and Spartans on the bottom. 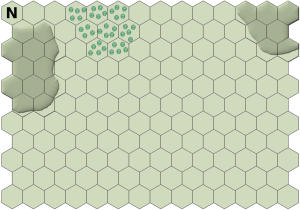 Mantinea. Both armies start within three hexes of their respective baselines. Allies on top and Thebans on the bottom.

As usual, you can print these maps on US Letter paper at 90DPI.

I was fortunate enough to find a copy of PRESTAGS MasterPack for under $150 on EBay. It was missing the Spartan and Legion games. Fortunately, I had both. The gentleman selling the game actually recreated all the pieces and the counters were silhouettes instead of the usual horse heads and weapons.

The maps are large and leave a bit to be desired. Scenarios actually only use a small part of each map. I’ve come up with an idea to create custom maps. My source for terrain is based on the map drawings in Dr. Sabin’s Lost Battles book. Here are the first two maps: Marathon and Platea. Both can be played on a US Letter sized piece of paper. 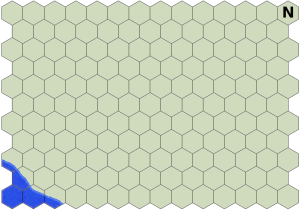 Marathon.  Both armies start within three hexes of their respective baselines. Athenians on top and Persians on the bottom. 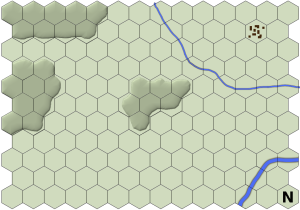 Marathon is a set piece battle. My standard rules is that no army can setup within 3 hexes of either flanking board edge and usually up to 3 hexes in from the base line.  The Persian Camp should be within a hex of the Bay of Marathon.

With Platea, the Greek armies can setup on either of the two forward hills but still cannot setup within 3 hexes of the left flank board edge.  The Persian armies will enter from the bottom of the board on Turn 1 after the Greeks have setup.

Maps printed at 90dpi should give something close to the 3/4″ hex that SPI used on their map.  It will nicely fit the 1/2″ counters.

This is my first post since WordPress messed with their editor. I can’t say I am a fan. They have automatic blocks. I am use to formatting everything myself. I need to figure out how to get the editor back into the previous mode…if that is even possible.