Return of the fog

I managed to clear the table of all of my Cracker Line ACW cavalry.  The Union now have 3 brigades of 6 stands while the Rebs have 2 brigades, one of 6 and one of 7.  I would have sworn I painted up 2 more stands but I can’t find them.  I noticed the table in my basement had been bumped and the stands were disturbed but no extra stands could be found on the floor.  Guess I need to learn to count.  Anyway, I turfed up the stands in the old school style so they match the battle mat well.

I applied a coat of Crystal Clear with out issue.  Then I applied a coat if Matte with the dreaded result…THE FOG!  As it turns out, applying this stuff in the evening after a warm day is not really a good idea.  It is most humid at night and that specifically is what causes the “fog” effect with matte finishes.  Like a Romans facing an elephant a cooler head prevails.   I simply applied another coat of Crystal Clear and the fog went away.  Now, I just need a time where the humidity is relatively low so I can apply the matte finish again.  Annoying, since most nights become humid quickly around here and most mornings, the humidity has not burned off by the time I go t work.  First world gamer problems, I suppose.

The shininess of the Crystal Clear is not so apparent on 10mm figures.  I am still going to hit them with matte finish.  Pictures this weekend.

Lord of the Rings Siege

My son and I have been having fun with a LotR siege game.  The game pits a small force of 12 elves and a hero against 2 bands of 12 Orcs as well as an Ogre and a small band of goblin archers.  If a band of Orcs are eliminated or routed, the  a new band comes to battle on the next turn.  The ogre and archers are removed from the game if they are killed.  The Orc force also has 4 ladders to scale the wall with.  The Elves must hold until turn 15, when another force of Elves arrives, ending the unlimited supply of Orcs.  At this point, the battle will be fought until turn 20 or until one side is completely routed.

Jack managed to eliminate my archers by turn 2.  They did, however, kill one of the elves with a lucky shot.  The Ogre managed to get to the door but was unable to bash it down before getting hit by a hail of arrows.  The ladders were placed on the wall and the Orcs managed to force their way up at one point on the front.  Then, the unthinkable happened.  It was bedtime.  Here are some pictures of the initial assault as well as the action at the end of turn 5.

Forces of evil approach the keep. 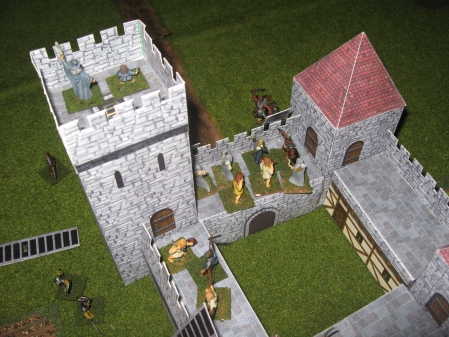 A view from the Elven side. One Orc has pushed his way onto the rampart.

A view from the front. The Orcs are scampering up the ladders.

A view from the side of the castle. One of the ladder crews was frozen by Gandalf. They come back next turn.

The castle is by Toshach Miniatures.  It is a free 10mm paper model that was enlarged to 1/72 scale.  The images were high resolution so enlarging them did not lose any of the clarity.  Great little model.  The ladders came from Fat Dragon Games Siege Engines set.  The images here are seamless so I was able to simply add several lengths together and reduced them to 75%.  I then cut two notches so I could hang miniatures on the ladders to make them look like they were scaling the wall.  This set is a must have if you want some cheap siege engines including a siege tower and a covered battering ram.  I recommend printing them at 75% or maybe even a little less.

Some of my friends and I headed to Southern Front 2016 this past weekend.  It is a small convention held annually in Raleigh, NC.  Originally, it was billed as a historical miniatures convention.  Currently, the participants number only about 100.  Several folks stayed home as they lived in states that were severely affected by Hurricane  Matthew.   The games were fun and, as usual, were presented with wonderfully painted miniatures and attractive terrain.  Matthew decided to change course and affected more of NC than anticipated.  The Raleigh area lost power at about 2:30 on Saturday but power to the Hotel was restored around 8:00pm that night.  Several games were canceled as it was tough to see in the hall.  Others persevered and continued to play by flashlights, provided by the hotel staff.  Despite the unfortunate complications it was a fun, relaxed even and I believe everyone had a great time.  I hope to see participation increase in the coming years.  Here are some highlights of games at the con including a few I participated in.

This table was scheduled to be used for about 5 games. I participated in Jimmy’s GASLIGHT game on Venus.

Squad Leader as a miniatures game. We managed to take the field against the Germans! A Stug III burns in the background as a German Platoon withdraws.

Yep! Won it out right! But at a pretty hefty cost. A German minefield claims two of my Shermans. My friend Andrew’s M-10 burns in the background, a casualty from being hit by a Jagpanther.

A battle on Venus! The Bogart Shamen summon their dinosaur minions to defeat the Sino European forces before they can get the diplomats off this crazy planet. Bloody battle but a fun scenario. In the end we did the save modifiers for shooting completely backwards. When the GASLIGHT rules say -10, that means you reduce the die roll by 10, thus making it much easier to save against missile attack! We were modifying the target number! 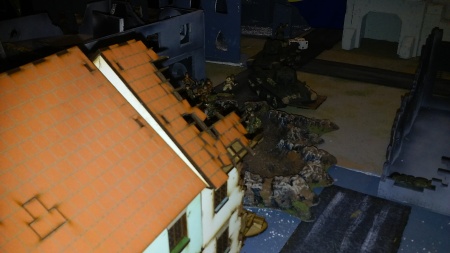 And then the power went out. Hurricane Matthew was supposed to hug the Carolina coats and head out to sea. Shockingly, the weather folks got this one wrong. Power went out around 2:30pm on Saturday and did not return until about 8:00pm that evening. This is a shot of a Stalingrad game using Chain of Command.

The hardcore gamers continue to the end. A shot of Ed Mohrman’s ACW game using “Before I was a Marshal” rules by the late Larry Brom. Adapted for ACW of course.

Recently, I watched the 1943 movie Sahara staring Humphrey Bogart.  It is a remarkable movie for a number of reasons.  As the movie was made in 1943, the equipment used was all state of the art.  The Allied vehicles were all authentic.  At various times in the movie, there was a M-3 Stuart/Honey, several M-3 Lee tanks, one of which was Lulu-Belle and a M-2 White Scout Car.  As the war was at its height, there was no German equipment to be had.  The White was presumably supposed to be an SDKFZ-250 half-track.

The movies that came about after the war in the early 60s had a curious negative tone toward our Allies, especially the British.  Thankfully, the tone of this movie is more of a cooperative one.  There are a managerie of characters from all arms, mostly explained away because they were at an aid station for various reasons.  They were fighting in the battle of Gazala and a general retreat had been ordered.  So why an American?  Well, the Allies were planning on invading Morocco and the Americans needed some experience fighting in the desert.  Our hero was part of a tank company sent to North Africa to fight along side of the British and gain some practical experience against the Germans.

There are a few stereotypical characters as well.  There is an Italian who is both a little round and has no real stomach for a fight.  He is, however, a pretty good mechanic.  There is a Frenchman who was driven out of France when the Nazis came and executed most of the people in his village because they were suspected resistance fighters.  He is also a bit round and has a love of good wine and good food.  Also not a terribly good fighter but he is willing to kill a German at first chance.  Finally, there is a Sudanese tracker who is a good fighter and is well respected.  Perhaps the most remarkable thing about this is that the movie was filmed well before the civil rights movement.  The character is both believable and well done.  Not a second banana by any stretch.

A remake of this movie was made in 1995 staring, oddly enough, James Belushi.  This was an Australian made movie.  I saw it on IMDB and thought Id give it a trying.  With lowered expectations, I watched it and was pleasantly surprised.  The cast of characters was quite good.  Most of the story was the same from the older classic.  The opening scene is still the same.  There are a few classic tanks, including a Matilda.  There is no German halftrack but there is a LRDG patrol that finds the gang.  They have a vintage Chevy and a Jeep.  The characters were similar to that of the classic movie but somehow were more endearing.  Luigi the Italian was less of a caricature than previously.  he was still a whiz bang mechanic and still just wanted to get home so he could live out his life with his wife and child.  Frenchy was portrayed a bit mean and even a little sinister.  When he switches out to the famous scene where he talks about what he would do if he were back at his vineyard, he was really likable, much like the classic Frenchy.  But then he remembers that it is not there anymore and he begins to brood again.    It was after this scene that you really see the lads bond.

The attacks were very similar though Waco never goes for help.  He stays to fight and pays the price like the rest of the men except two.  The big difference is that in the old movie, Lulu Belle never moves during the fight.  In the new version it goes on a bit of a joy ride hitting the German attackers hard.  Note that at this stage in the war, German infantry had no effective means of dealing with an M-3.  This is a recon battalion so even if they had a 37mm gun, it would have been ineffective against the 2″ sloped plate of the Lee.  Perhaps not as cool looking as the tank assault on the tree line in the movie “Fury” but a pretty good scene none-the-less.

Finally, there is Joe Gunn.  We all probably know about Bogart and his role.  He does do a fabulous job.  He is quite capable and brave but it not the “Mary Sue” that other action heroes are.  In fact, he is kind of flawed and can even be mean at times in his own right.  As played by James Belushi?  Surprisingly good.  My objection to him is not with the acting but rather with the look.  Belushi just didn’t look “military.”  he did not have a tanker’s uniform which almost certainly would have been a khaki coveralls like the one Bogart wore.  His hair was too long and the hair style a bit too modern.  But his acting was quite good.

You can’t go wrong watching either movie.  They tell the same story.  The acting is quite good in both though the style in the classic movie is a bit dated.  The sign of the times I suppose.  Get them both.  Watch them side by side.  Well worth the 3+ hours you will spend.