Gaming is not something I do over the holidays except for the odd computer game or maybe a game of checkers.  Holidays do give me time to ponder what it is I want to do in gaming over the next year.  One of those things, of course, is to finish up my considerably large project for the American War of Independence.  I plan on using “A Gentleman’s War” for head to head smaller games.  It does provide a fun wargame for both players but does not really lend itself well to multiplayer games.

I’ve been gaming long enough to know exactly what game mechanics work for me and what don’t.  Often I write games as an experiment and use one game mechanic or another.  Sometimes it is just to provide a more codified game system.  But it occurs to me that I’ve used enough of these mechanics and definitely favor some over others.  So I’ve decided to write a rules set that, in theory, would be my perfect rules set.  So, much like I did with Charles Grant’s magazine game “Battle”, I plan on going through the various phases in a series of articles and coming up with something (not so) unique that appeals to my taste.  With some luck, I hope that you will find it appealing too.

Other than designing yet another wargame, I do plan on continuing with my AWI project.  I also have some 3D printed pre-dreadnought ships that deserve some attention.  I am planning on using White Bear, Red Sun (Manley) for the rules.  I have some 6mm ww2 figures already painted and based looking for a rules set to play.  Playing a double blind game of Crossfire (Conliffe)  is quite approachable and my son might even put down his Pokemon deck to play.

A Quest into the Bad Land Part 2

Continuing from part 1.  Bertie had made his escape.   The rest of the party would follow up.

Things were getting hot. 13 new minions were reinforcing the enemy. They all seemed to be coming from one tribe now. This would be a tight escape. 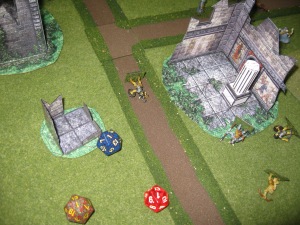 Drastic measures he said. Roll three dice he said. And this is how a second reinforcement card was drawn…with another 15 minions, this time blocking the path ahead. 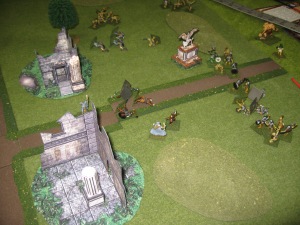 Maynard gets his act together and throws a well aimed fireball despite the -2 manaflux.

A couple of arrows from Jack’s bow, another fireball and Sir John had mop-up duty.

Stepping over the chard and hacked remains, the rest of the party made it to safety.

The party escaped a surprisingly tough fight.  One member was knocked down but his wounds proved superficial.  In the end, with some loot from bodies and the treasure cache, the party ended 97 coins and a total of 5 XP, 1 from finding an item of interest and 4 for completing the mission.

And now for something completely different…

A couple of figures from Dungeon Works.  One death knight and 1 lich/skeletal mage.  I found that these figures print bigger than the figures from Fat Dragon.  For 1/72 scale I’ve been scaling down to 75% size for FDG figures.  For DW figures, I found 67% is more appropriate.  I guess FDG is true 28mm while DW is more like 30mm. 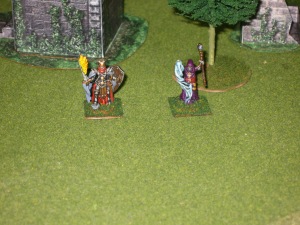 Figures were printed on a Creality Ender 3 Pro.

I’ve decided to put some armies together for the French and Indian War and the American War of Independence.  For scenarios I am using the book Seven Steps to Freedom by Charles Wessencraft.  It outlines 7 phases of the American Rebellion starting with it’s roots in the F&IW.  The first scenario is Braddock’s Defeat and the Battle of Turtle Creek/Braddock’s Field or simply Braddock’s expedition.

The rules used in my games will be A Gentleman’s War.  Normally this is a head to head game and the card play really only lends itself to that style of play.  However, if  I get a number of players around the table, I will probably use a card system more similar to The Sword and the Flame.   The Wessencraft book game rules use a low figure count per regiment at around twelve figures per similar the A Gentleman’s War so this has turned out to be an excellent purchase.

Here is a couple of shots of the first few regiments.

Two English regiments. Each has 12 figures.

This is how I can normally get a lot of figures painted and on the table.  I plan on painting to the scenario.  So I have 4 Indian Warbands to pain, another 3 English regiments and 3 continental regiments.  I also need one or two light cannon depending on how I decide to crew them.