I had some initial thoughts that after a few ore games I thought maybe were not such a good idea.  One thought was that skirmishers, especially javelin armed skirmishers were not any good.  True they could get slaughtered in a fight but historically they are simply harassing units.  It was thought by several folks that light troops in general should have some sort of evade rules.  I am not so certain.  In my last fight, my velites were able to shoot and then inflict a few more hits in melee.  True they took heavy casualties but I allowed them to retreat through the formed body.  I was then able to counter attack with fresh units on the next turn.   So I was able to pull back spent units before they were eliminated, and thuse being counted as victory points.

Some units are a bit weak.  Specifically, the Punic infantry and Hellenistic cavalry.  Though both units were substantial armor, Neil Thomas felt for some reason that they should only have a 6+ armor.  And yet, the Roman cavalry have a 5+ armor!  Both of these I would change to 5+.  Speaking of Punic infantry, I also had a notion that they should be classified as auxiliary infantry.  However, I think the Hoplite classification is fine.  they can deliver a punch and then start to fall apart when they lose that first stand.  I do think the Punic Veterans should be heavy infantry as the Romans are.

My next fight shall be Hereclea, the classic matchup between Pyrrhus and Rome.

Dertosa with AMW on my new VASSAL Module

I played out a full game of AMW on my new VASSAL module.  The only rules modification was that I allowed light infantry to pass through and be passed through by other units.  I did change the Carthaginian army a little.  The African infantry had a 5+ armor instead of 6+.  I also added Spanish auxiliaries.  Below are screen shots of the fight with a brief synopsis of the action shown.

Some clarifications before the start.  Moves are all straight ahead.  Formed (ie heavy) troops may make 1 turn at any point during the move.  Light troops may make any amount of turns during movement since turns are free for light troops.  If a unit is forward an to the side of the front corner of an enemy, it may only flank attack that enemy if the enemy is already engaged to the front.

Both armies advance. The Numidian cavalry races ahead of the Punic line to harass the Roman cavalry.

Both armies jockey for position. After a round of skirmishing, the Roman cavalry charges home and causes damage before they are obliged to leave the field. 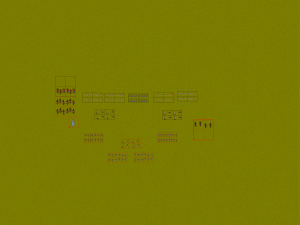 On the right, the Numidian cavalry advances and harasses the Roman heavy infantry. In the center both armies continue to maneuver. The velites screen the main body. On the left, the Punic cavalry charges home. An indecisive melee ensues.

On the right, more shooting from the Numidians. Center gets bloody as the Punic phalanx loses cohesion. The Spanish infantry are charged by the Triari, who cause some damage.On the right, the Elephants make themselves known. The Roman heavy infantry are routed, but not before they severely damage the Punic cavalry.

The Romans are running out of troops. The Punic army, though more numerous, is quite thin as well. Numidians score another hit. The Elephants dispatch another Roman heavy infantry and the Triari are finally routed. Romans patch together their line as best they can. 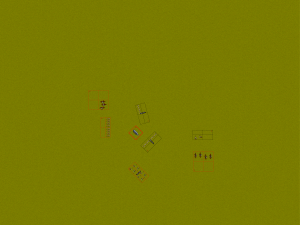 The Romans are in big trouble. In the center, they decide to guard against the biggest threat…the elephants. If they survive, they may flank the elephants and cause some damage.

I said IF they survive. The Elephants charge the Roman heavy infantry simultaneously with the slingers charging the flank. 9 casualties later, another Roman infantry is routed and the Roman army morale collapses.

This was a battle using typical Roman tactics vs typical Carthaginian tactics.  The light infantry did their damage before being spent.  Allowing them to pass through the lines to escape felt right, as that is how the primary sources say they did.  So the Romans tried to soften up the center and then attack with a frontal assault.  The Triari made a rather desparate move to attempt to kill off the Spanish infantry in the center before they got flanked.   They made good progress but in the end, were getting whittled down.  The Elephants finished them off.  Speaking off elephants, they are quite strong as they can roll 8 dice against EVERYTHING.  The hits caused are casualties.  NO SAVES!  So it would seem the better practice for the elephant player is to keep them in reserve or in position to strike before the enemy can missile them to death.  The enemy player should do everything possible to dispatch them, either with missile fire, or melee with expendible troops such as Velites or other light infantry.