In an effort to get a game that is easy enough to play with my kids and nuanced enough to represent ancient warfare, here is some general thoughts on ancient gaming.

Lots of games out there (both commercial and free) are a collage of other game mechanics from games gone by.  Some use the hit/save method.  Others use a table with results that remove casualties.  In effect, the designers have taken what they think were the best bits of their favorite games and have “stewed” them together.  Like a stew, sometimes the flavors blend nicely while other times they just make an icky mess.  Rather than trying to blend games, I’ve thought of some of my favorite design criteria to apply and have gone from there.  A few of the game mechanics are originals while others are not so original.  There has been no conscious effort to reuse another game designers game mechanics…well…sort of.

I am a fan of Neil Thomas’ style of gaming.  there is nothing out there in the real world that can’t be approximated with simple game mechanics.  The size of his games are perfect giving intermediate sized armies with 8 units of 4 WRG style stands each.  This undoubtedly was influenced by Charles Wessencraft’s Practical Wargaming book.  Units there are either 4 or 8 stands with special units such as chariots or elephants represented by just 1 stand.

I like the idea of alternating moves rather than plotting moves and then executing them simultaneously.  Shooting and melee can be resolved simultaneously and casualties can be assessed at the end of the round.  You can even use an initiative roll at the beginning of the turn.  The winner could pass the initiative and move second or take it and move first.  While we are on the subject of turn sequence, I am not so certain that shooting shouldn’t come first.  I’ve seen it done this way in games such as Fantasy Rules(!) but it was not well executed since each turn in that game is a strict IGO-UGO.  There were times when units would never get to shoot because the enemy would bring units in that could move faster than the shooting range of the shooter.  In an integrated turn sequence though both sides will be jockeying for shooting position first so they can shoot at the enemy in hopes of gaining an advantage at some point on the line.

Movement should be simple.  A simple 4″, 6″, 8″, 10″ for Heavy Infantry, Light Infantry, Heavy Cavalry, Light Cavalry suffices.  Turning, like both Thomas’ and Wessencraft’s rules can be pivots around the middle.  It should cost a portion of the units move.  The plodding phalanx might require all movement to change facing while other heavy formations might only take 1/2 of a move. Light formations may make 1 facing change for free so they could turn and get the heck out of harm’s way.  If they only made a half move, they could turn around again for the rest of their movement.

Only the front stands in a 2X2 formation may attack.  Each unit should have a fight value. not unlike Tactica.  This is simply the roll that an enemy attack must achieve to hit the unit on a 6-sided die.  A fight value of 4 is for unarmored troops such as javelin men and archers.  A 5 is for barbarian warriors peltasts and other loose order heavy infantry.  A 6 is for all other fully armored heavy infantry such as hoplites and legionaires.  To attack in melee, 1 die is rolled for each stand in contact.  For each score equal to or greater than the fight value, 1 enemy stand is removed.  Shooting is a little different in that the first hit will only temporarily negate 1 enemy stand for that current turn.  A second hit will actually remove the stand instead.

Morale could be handled in a simple way as well.  If a unit loses a melee (it takes more stands lost than the enemy) roll a 6 sided die. If the roll is a 1-3, retreat the unit that many inches facing the enemy.  4-6 retreat the unit that many inches facing away from the enemy.  This is important for the next initiative roll.  If the winner wins initiative on the next turn, he can opt to go first and attack the retreating unit in the rear.  The effect of routing.  Retreating cavalry would double the score on the die.  Also you can deduct 1 for regular troops and 2 for veteran troops from the die roll.  This will me better troops will be less likely to run and may even stand firm while levies (add 0) will always at least give a little ground when they lose.  Victorious units will always be required to followup but never more than 3″ (double that for cavalry).

There are some other details I’ve thought of for handling long spears, pikes, skirmish troops, formed archers, elephants, the pilum and chariots.  Hopefully, this little experiment will yield a game that my kids can understand and that I can enjoy. maybe they will learn a little about Ancient warfare along the way. 😉

A test run with the Biblical lists

Keith from Minnesota and a new opponent gave the Biblical lists a test run.  Here is a photo from Sea Peoples vs Trojans.  It looks to be a pretty close fight so far.  This appears to be the point were the two lines make initial contact.  I think the Trojans might be getting the worst of it. 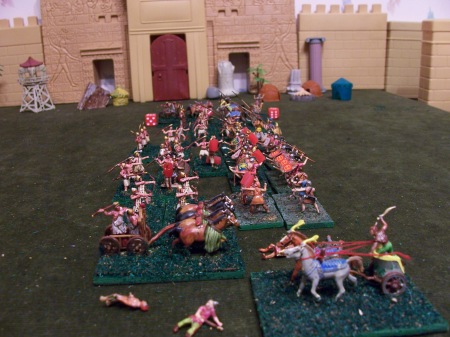 Sea People on the left clash with Trojans on the right. It looks like the Sea People have a slight advantage. The center is showing some hits while the flanks seem to be about even.