And so the battle begins.  I’ve adjusted the terrain based on a map by Civil War Battlefield Trust.  Most of the positions of troops on the battlefield are based on the scenario layout in the original Fire and Fury miniatures game.

I’ve allowed the Confederate divisions an extra action (3 instead of 2) to represent the relative surprise of the attack for the first turn only.  The Union have their sharp shooters.  They cannot be represented by a physical body of troops because their were less than 500 on the battlefield in 2 regiments.  So at the end of a turn, the Union can place 2 “shots” on Confederate units.  The Union player rolls a die.  If the result is a 1, a stand is removed.  2-5 the unit in question takes a morale marker.  On a 6, the sharp shooter marker cannot be used for the rest of the game.  Sharp shooters are available for the first 4 turns.  I’ve reduced the penalty for a damaged battery from 2 to 1.  This is because a 12 gun battery has about the firepower of a single brigade.  When a brigade takes half damage, it is at a penalty of 1 for shooting.  Finally, I’ve allowed Sickles and Longstreet a couple of abilities other than just modifying the battle results.  First, they have the ability to make a single unit pass morale without rolling the die.  Units that receive the auto pass may not charge or move closer to the enemy that turn.  They may still shoot.  Second, when Sickles or Longstreet’s card comes up, instead of moving, they may order one of their divisions to move instead.  This is not an extra move for that division.  When the divisions card comes up, just ignore it.

Battlefield is adjusted and the troops are ready to go. 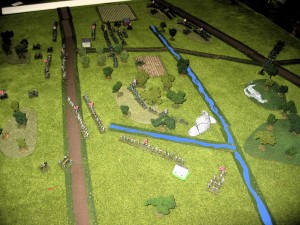 Rebels advance. Union gets a lucky shot in and Barksdale advances uncontrolled toward Trostle’s Farm. 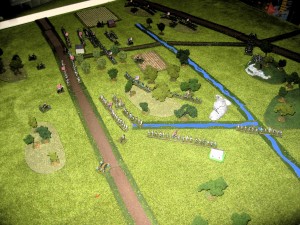 Rebels come to grips with the Union troops. Heavy fighting up and down the line.

Rebels eject Birney’s division from Houke’s Ridge. However, casualties are mounting. Benning’s brigade gets hit by heavy ire from sharp shooters. McLaw’s division advance from the peach orchard but pays a heavy price. 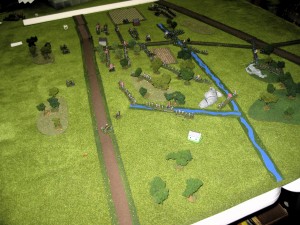 Union troops arrive. Barnes division solidifies its position on Little Round Top uncontested.  Benning’s brigade manages to take Devil’s Den despite taking horrendous casualties.   Near Devil’s Den, Birney is mortally wounded while trying to rally Ward’s brigade.  The first officer casualty of the battle.  Ward’s and Carr’s brigade both were destroyed by this point.

Two brigades from Anderson’s division arrive to help bolster McLaw’s wavering attack. However, the last of the Union reinforcements arrive.

I think the sharp shooters were a good idea.  However, I think 1 attack per turn is plenty.  As it was, they destroyed 2 stands of infantry.  The other thing I did was make many of the Union troops have a 3 combat value.  Perhaps too many.  I wanted Sickles troops to fall back in disarray as they did historically.  That so far has not happened to the degree I would like.  Perhaps educing both of 3rd corps division to combat value 2 would do the trick.

This entry was posted on Saturday, April 18th, 2020 at 3:02 pm and is filed under ACW, OTR D6. You can follow any responses to this entry through the RSS 2.0 feed. You can leave a response, or trackback from your own site.