I had a long stretch of time and energy last night and was able to complete several more trees and another house.  I also drew up some rivers and roads, including intersections and bends.  I printed out a sheet of each.  I am very happy with the results. 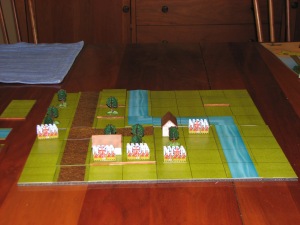 The result of a night’s work with some newly configured infantry regiments including one prototype (right front) for comparison.

The last bit I did last night was to rearrange the infantry command stand.  I found that the flag was flying in the wrong direction.  Wherever the commander stood, there would be an open space over his head.  So I changed it so the flag fly behind him.  I then placed him in the middle of the stand.  The regiment looks much better.  Take a close look at the stand to the right front and compare it to the stand next to it.  You will see what I mean.

I have a set of grenadiers already placed together.   As I am drawing, I keep the masters white except for the skin color, common parts (muskets, swords, scabbards, pouches etc) and place them in a group front-back so they can be colored quickly.  I keep one single of each to colorized and then simply copy and paste it into position directly over the white models.

This entry was posted on Friday, April 7th, 2017 at 7:52 am and is filed under Game Design, Miniature Games, Portable Wargame. You can follow any responses to this entry through the RSS 2.0 feed. You can leave a response, or trackback from your own site.