A Quest into the Bad Land Part 1

I’ve been working on a random scenario generator for Sellswords and Spellslingers.  It’s really a series of tables with some scenario ideas for each aspect of a scenario.  In this scenario, I rolled a “recovery” mission.   Of these types of scenarios, it could be a single item or as many items as the party can find.  I gave it a 50-50 and ended up with recovery of 1 item.  There are D3+1 search locations.  I ended up with 3.  When a character searches the first location there is a 1-2 on a D6 chance of finding the item.  For the second location searched, there is a 50-50 chance.  If it is not in the first 2, then it is in the last one, of course.  I rolled hilly terrain and for a special location I ended up with ruins.  So there are 3 major ruined buildings the party must search.  The character spends an action.  The die is rolled.  Regardless of whether the item is found or not, D3 minions jump out and attack.  The party entered via the road that lead directly into the city.  As they advanced, Maynard the Wise (Wizard) noticed something of value on the statue near the main road.  Sir John and Bertie Wainwright moved ahead to scout out the first building.  Hordes immediatly spotted the advancing party and attacked Maynard and Jack the Swift.  Jack was equal to the task and easily dispatched all three hordlings.  He also spotted the Orc brute in the town and put 2 arrows into him.  5 consecutive hits!  At this point, the scenario event was pulled which revealed a rival Orc faction.   2 Hordes and 1 brute.  3 hordlings have bows and immediatly fired at Bertie scoring 1 hit. 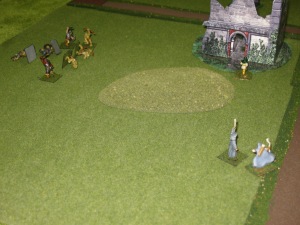 Sir John had already gone into the first ruin and fell on his face tripping over a trip wire (Trap).  The wounded brute charged after him.  His trusty squire Bertie jumped in and over Sir John delivering a knife throw to the Orc Brute’s throat.  Outside, Maynard causes some mayhem of his own. 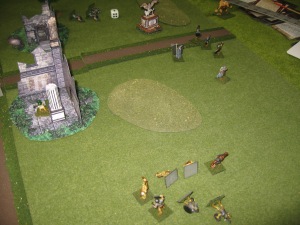 Maynard uses his trusty fireball and kills 4 hordlings and badly wounds the brute.

Despite the successes, Maynard is ambushed.  He dispatches this foe.  He is then beset upon by 3 more (They are at our back!) and dispatches those in turn.  This guy is pretty good!  Jack the swift is also ambushed and fairs worse taking 1 wound.  The wounded Orc brute advances and knocks Jack down!   Things are not looking good!

Finally the Orc brute advances on Maynard but Maynard is not impressed and finishes the Brute off.  Maynard moves back toward Jack and finds he was only unconscious and had only 1 wound.  (At this point I found an error in the book.  18 on the out of action table is not covered.  I made the best result an 18-20 but maybe I should have made the next lower result 15-18 instead.  Whatever)

Back in the ruined temple, Bertie and Sir John managed to get there act together.  As Bertie finished off the last hordling, Sir John found something.  3 Orcs.  A wild melee ensued.  Bertie took his second wound as Sir John finished off 2 of the Orcs.  The last one fell to Bertie’s short sword.   Not a moment sooner the party heard the blast of Orc war horns.

More hordes appear on the horizon. 13 to be exact!

At this point, I called it for the night.  Tomorrow shall be the conclusion of the Search for the Lost Treasure.

This entry was posted on Friday, October 25th, 2019 at 10:52 pm and is filed under Fantasy, LotR 20mm. You can follow any responses to this entry through the RSS 2.0 feed. You can leave a response, or trackback from your own site.

2 Responses to A Quest into the Bad Land Part 1