For King or Empress: A Quick Overview 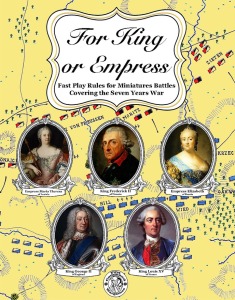 I’d been eyeing up For King or Empress by First Command Wargames for some time now.  There is a relative dearth of information on this game.  I finally got the bug and decided to take a chance on the PDF version of the game.  FKoE is a relatively short rule book, at least by today’s standards, weighing in at just 44 pages.  About half the rule book is devoted to all aspects of the game.  FKoE uses a card activation system.  When a General’s card is pulled, the owning player makes a move with all units under that General’s command.

Units move at double speed when they are outside of 8″ from any enemy unit.  Within 8″, units move at normal speed.  This is a simple way to have units fight deployed without having to fiddle with actual formation changes.  There are simple rules for wheeling.

If hits are sustained, morale checks are made.  The more hits you take, the worse the penalty for failing a morale check.  No unit can take more than 4 hits before automatically routing.  A failed check on 3 hits, for example will cause the unit to take another hit and route.  I noted that morale also goes down by 1 for each hit.  So you are double penalized for taking hits on units.  I am not really sure how I feel about this.  After a couple of plays, I will have a better feeling.

Shooting and melee are handled in the same manner.  Each unit (a single element representing a battalion) gets 1 die.  If you roll the units combat rating or less, you score 1 hit on the enemy.  If your chance to hit is 6 or more, you automatically score a hit.  For numbers greater than 6, there is a chance you can score a second hit.  Also, combat hits in melee are modified based on the situation.  Horse, for instance, takes an extra hit when meleeing infantry from the front.

There are rules for setting up the battlefield and a few quick suggestions for campaigns.  Most of the rest of the book is concerned with army lists.  There are set piece lists for small armies which are assumed to be for battles against the advanced guards and more extensive lists for full armies and big battles.

There are some minor errors in the book but no show stoppers.  The game lists the equipment needed at the beginning of the book.  Among the dice needed are D12s and D6s.  However, when we get to the morale section, the call is for a D20.  The call is repeated in the QRS which tells me that D12s were once used for morale but have fallen out of favor for D20s.  Not such a big deal since everything related to morale seems to be geared for D20s throughout book.

So, yes.  The rules junky fell off the wagon and got another wargame.  This one is on my list of games to play in the near future.  The upshot: I have two Baccus 6mm starter armies.  I’ve been vacillating back and forth how I should base them.  I think I have my answer now.  The rule book calls for 4cm frontage and 3cm depth for infantry.  So 3 ranks fills that out nicely.  Ill probably leave a 1cm space to the rear of the base for placing hit markers…which I also have.

This entry was posted on Wednesday, September 13th, 2017 at 11:12 am and is filed under Miniature Games, Reviews. You can follow any responses to this entry through the RSS 2.0 feed. You can leave a response, or trackback from your own site.

3 Responses to For King or Empress: A Quick Overview